Kinu Kiuchi was appointed as a chairman of Board of Directors in 1952, and instilled in the students the spirit of wood sorrel (meaning ’shining hearts’).
Looking for a four leaf clover in the wilderness, the ideal of the young. From “Katabami” (Kiuchi Kinu)

It comes from long ago when Buddhist alter brass and wrought iron items were polished with wood sorrel, leading to the flower meaning of ‘to polish one's heart and make it shine.’The wood sorrel became the symbol of the school. 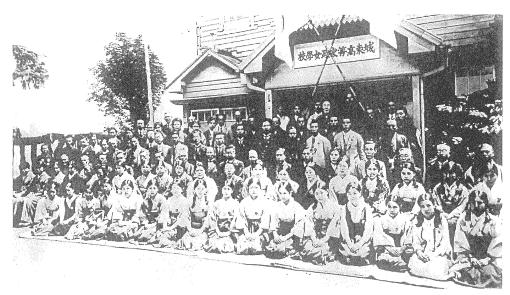 Also, at the request of Nagareyama City the social welfare corporation was established in July 2010 and in April 2011 the Edogawa no Mori Hoikuen Nursery School and child care center ‘Himawari’ commenced neighboring the Edogawa University. The Edogawa Minami Nagareyama Nursery School also started in April 2014.Today the Academy has developed into an integrated school with education facilities from nursery schools, an elementary school, junior and senior high schools, to a technical college as well as a university.

History of the University